Coughing —
as a symptom

First there is a dry, irritating cough, and then the cough gets productive with the secretion of mucus - but no matter which cough, it is always annoying and unpleasant.

Cough is a typical symptom of a common cold, and can be especially disturbing during the night. Coughing should not be suffered in silence - it should be properly treated! 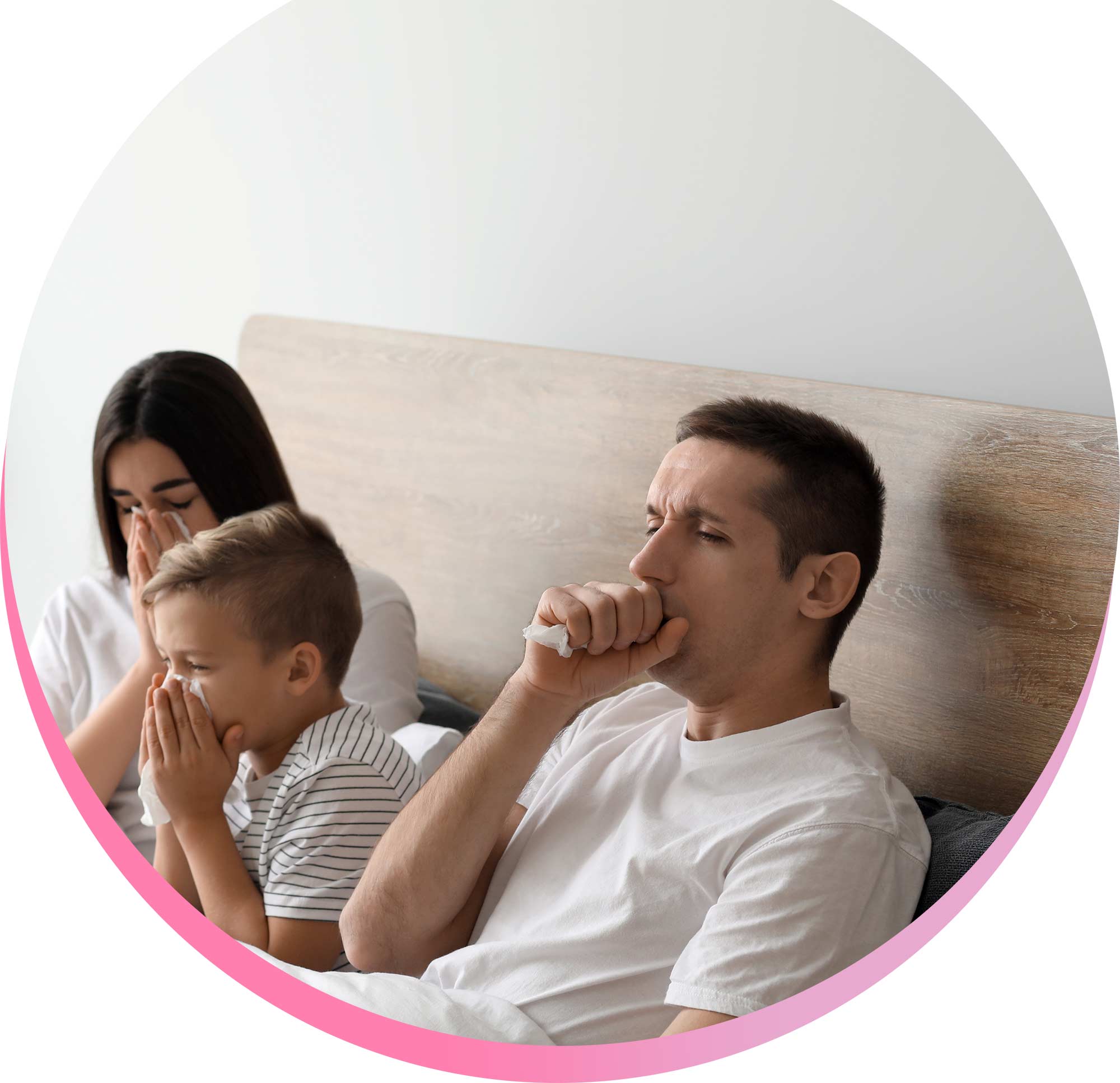 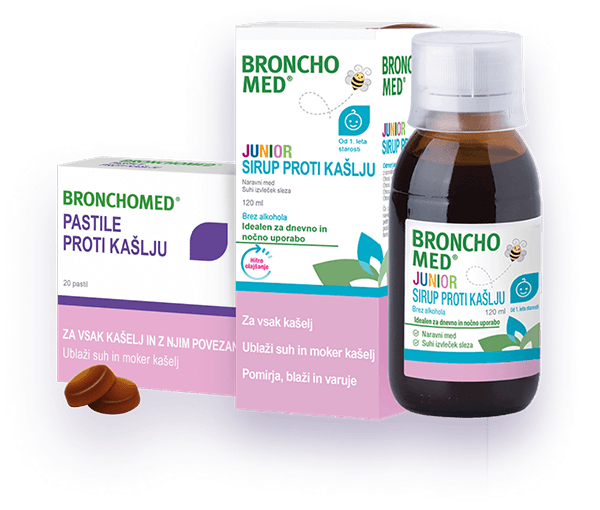 Many types of cough —
one solution

Bronchomed products are fast-acting medical devices that relieve all types of cough (dry cough and chesty cough) associated with a cold.

There are two types of airway infections that may accompany a common cold:

In these cases coughing often is a symptom of acute infection of the upper and/or lower airways, for instance, accompanying a common cold. These infections are caused by viruses and usually last just a few days, possibly up to two weeks. 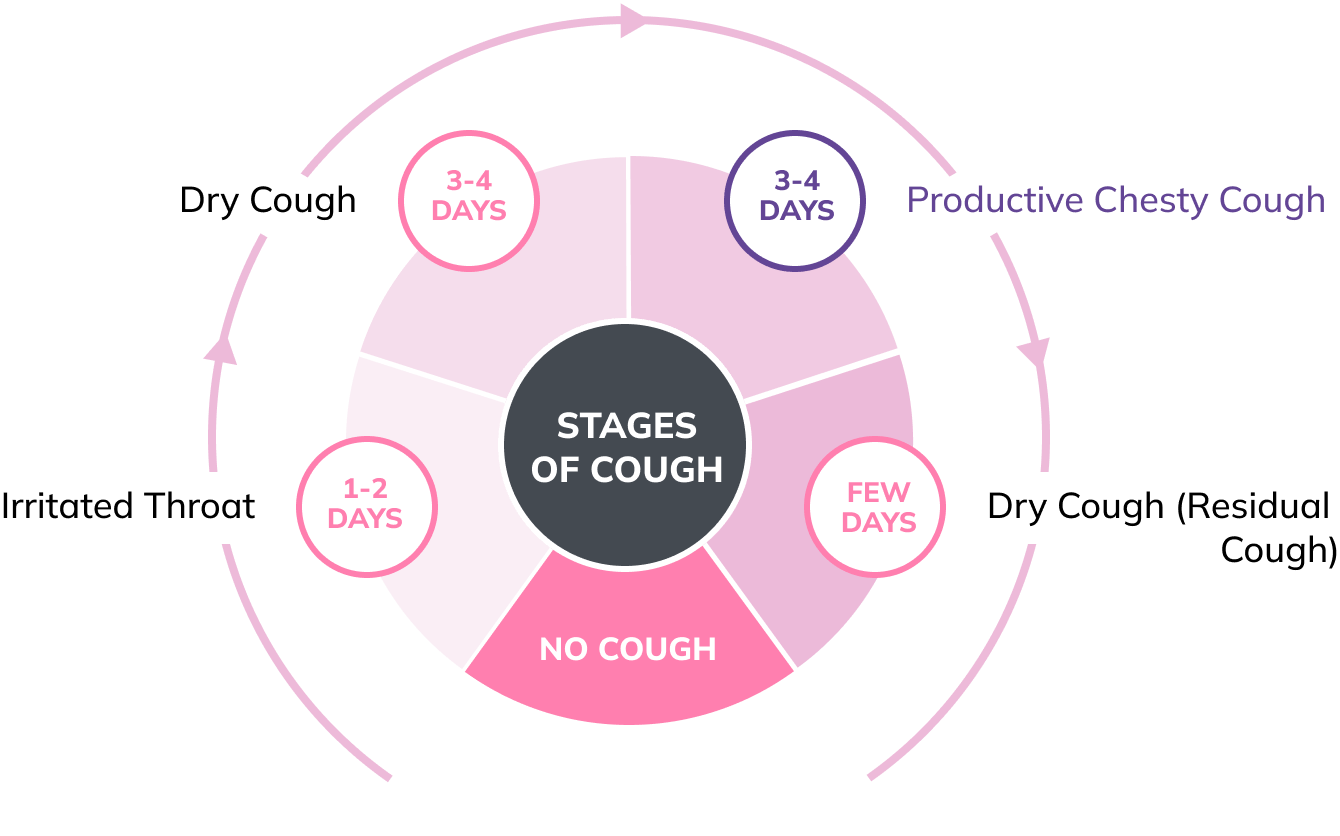 Dry cough is tickling and irritating, due to an irritation of the throat caused by foreign particles, dust or a throat infection. In this kind of cough no mucus or phlegm is produced. Dry cough is usually treated with antitussives.


Productive (Chesty) cough is characterized by the formation of mucus or phlegm in the lungs. The cough reflex is a mechanism to expel all phlegm in order to clear the lungs. Chesty cough is usually treated with expectorants.

An early treatment is important because otherwise the infection could progress into a more severe form of disease (e.g. bronchitis). Bacteria often take advantage of the immune system being weakened by the viral infection. This may lead to an additional bacterial infection (the so called secondary bacterial infection). One sign which may help to differentiate between bacterial and viral infections is the color of the secreted mucus:


In viral infections the sputum often is mucus-like and whitish. The "common cold" is usually caused by an acute viral infection. Typical symptoms of a common cold are cough, „the snuffles“, sore throat, sometimes muscle pain, headache and elevated temperature or fever.


In bacterial infections the sputum tends to be tinged yellowish-green.

If the symptoms persist for more than 1 week in the latter case, you should see a doctor without delay, since treatment with antibiotics might be necessary. 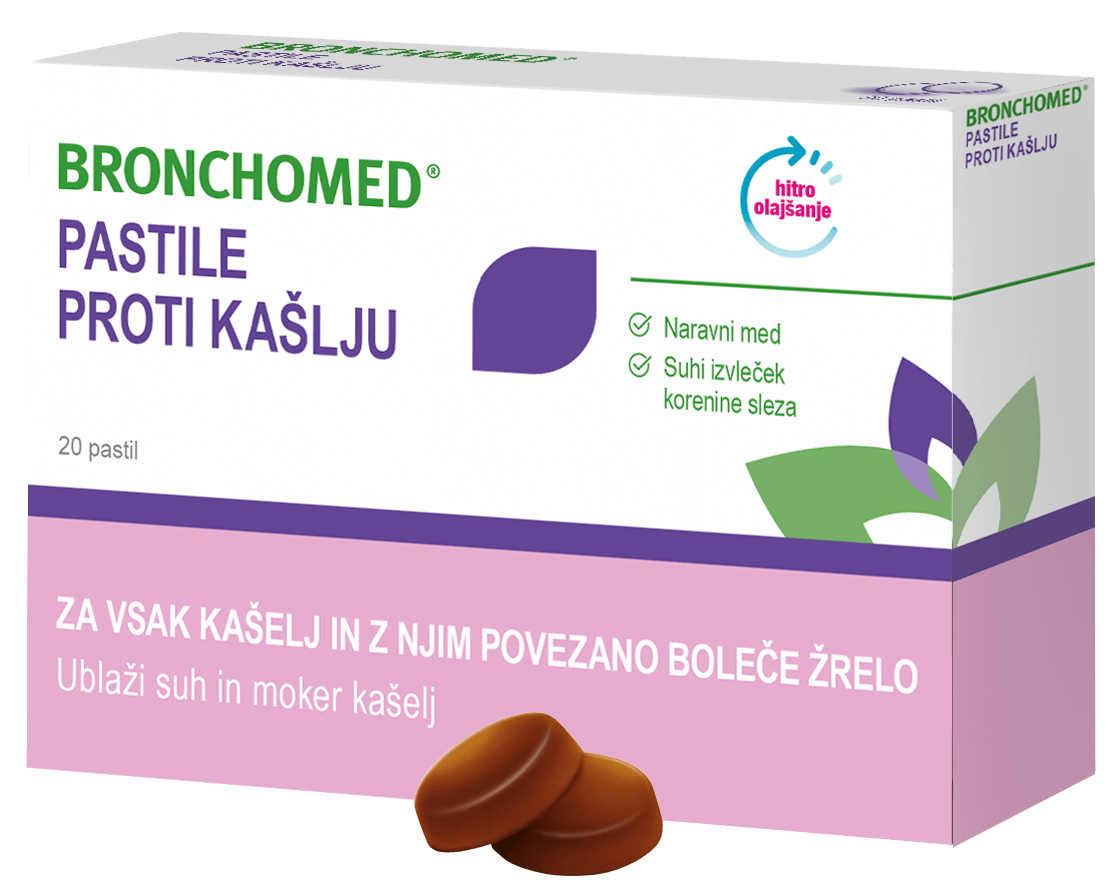 Bronchomed Pastilles is a medical device
according to the Directive 93/42/EEC.


At work, while doing sport or simply during a café with your friends, Bronchomed Pastilles accompanies you everywhere with its easy-to-take format. Thanks to its unique formula, Bronchomed® Pastilles reliably and quickly relieves any cough associated with cold, for both dry and chesty cough.

When a child has a cough, It’s a concern for the whole family

Parents naturally worry when their small child has a cough in case it could be the sign of something serious.


It can also cause disruption to sleep, as well as the daily routine, for the whole family.

The ISSUES parents struggle with when their child has a cough1* 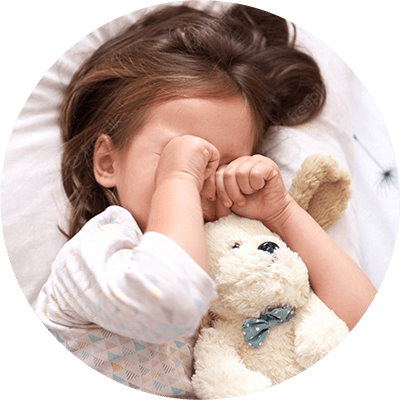 experienced REDUCED SLEEP for their child 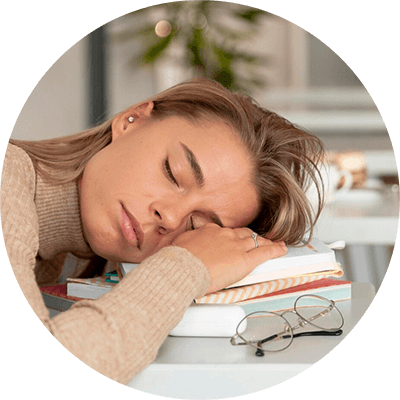 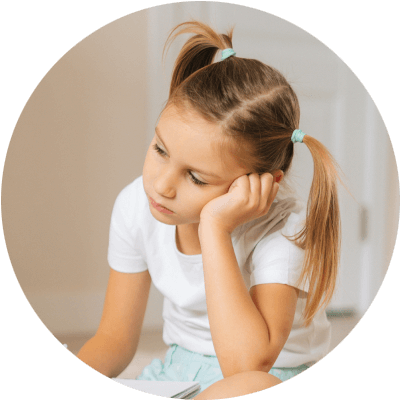 the children had TIME-OFF SCHOOL/NURSERY 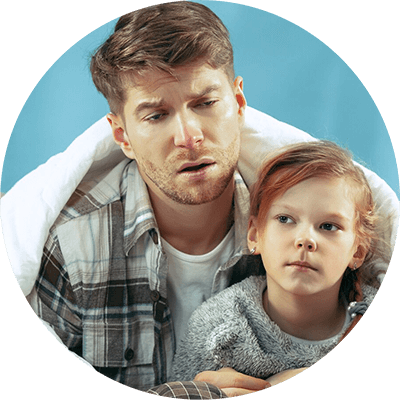 While the most common issue relating to children’s coughs is reduced sleep for the child,1* the effect of children’s cough can cause disruption to many areas of family life.

* Bronchostop Junior Launch Insights gathered from online interviews, involving 402 parents across the UK, conducted in May 2018 by DRG, with participants sourced from Panelbase (DRG’s in-house panel)

While it’s totally understandable that parents worry and may think they should go straight to their doctor, in the majority of cases children have a common cold that will run its own course. They simply need something to soothe the cough reflex so that everyone can get some relief.


YOU CAN REMIND PARENTS FOR WHEN TO SEEK MEDICAL HELP:

The cough is worse at night or brought on by running about - it could be a sign of asthma.

The child’s temperature is very high, or they feel hot and shivery – they may have a chest infection.

The cough lasts longer than 3 weeks.

The child is finding it hard to breathe.


OUR FOCUS IS COMMON COUGH ASSOCIATED WITH A COLD.

A type of upper respiratory tract infection (URTI) that can be DRY and/or CHESTY.

REFLEX ACTION A cough is a reflex action to clear the airways of mucus and any irritant.3

CHESTY COUGH Phlegm is produced to help clear the airways.3 It is also called ‘productive’.

What to Advise
Refer to a doctor for diagnosis and treatment if the cough is severe.5, 8-10

FAST ACTING RELIEF FOR ANDY COUGH* IN CHILDREN FROM 1 YEAR

BRONCHOMED® JUNIOR soothes the cough reflex in stages of both DRY and productive CHESTY cough by covering the cough receptors with a protective layer of marshmallow extract and honey.

Traditionally, productive and non-productive coughs have been managed differently, but the ingredients in BRONCHOMED® JUNIOR work in synergy to relieve both dry and chesty coughs. 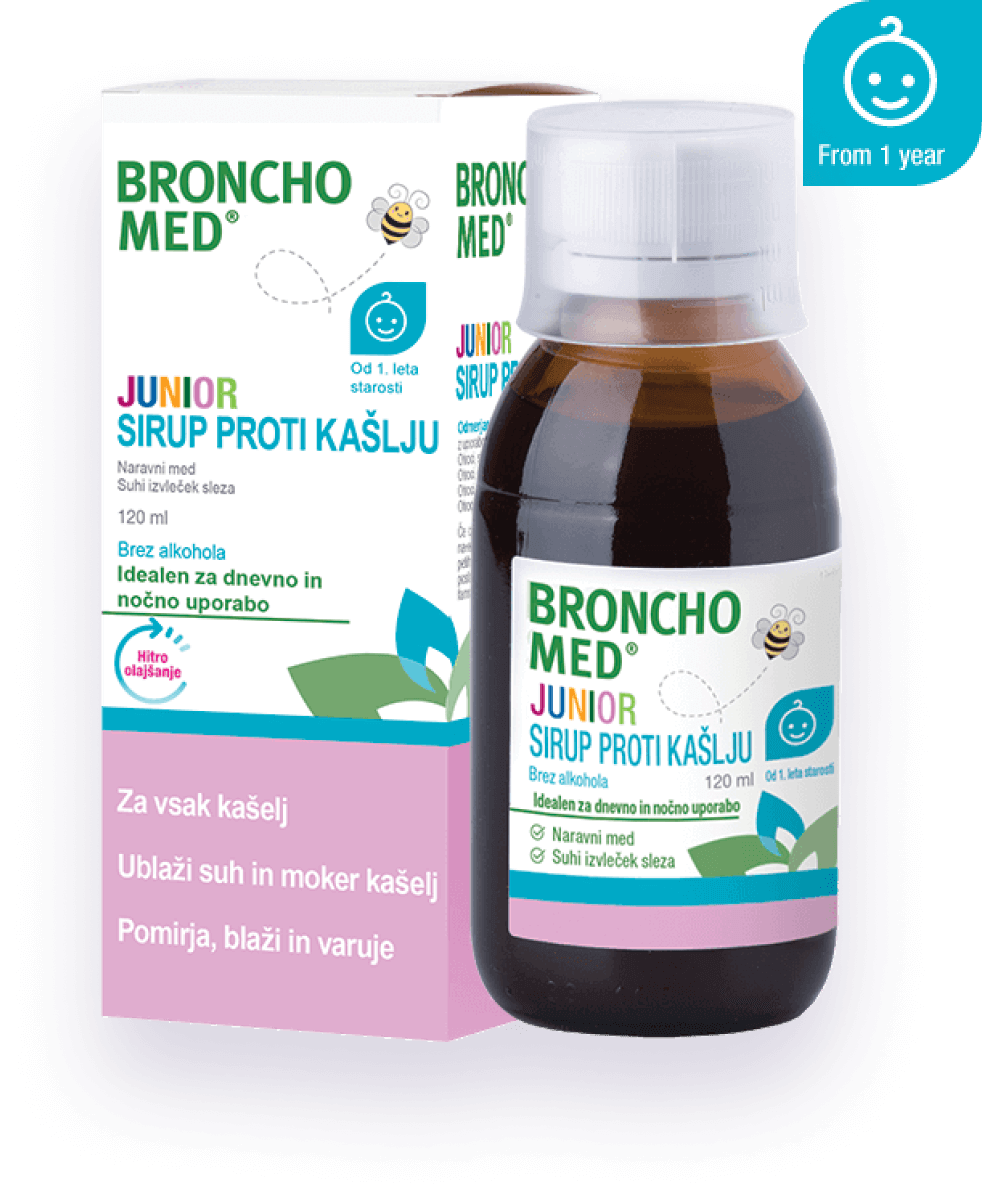 Bronchomed Junior is a medical device
according to the Directive 93/42/EEC.